Based in Mallorca, an inspiring island known for its natural beauty and cultural richness, artist Guillem Nadal is among the most important contemporary artists in Spain. His paintings, drawing inspiration from the island and with a recognizable and rare technique, have been exhibited in prestigious museums, art fairs and foundations.
Nadal’s oeuvre is not only beautiful, it is conceptually rich and bold, he thinks of an artwork not necessarily as a painting or a sculpture, but as a combination of both, creating three dimensional works that question the verticality of a painting and the inherent need of a base in sculptures. 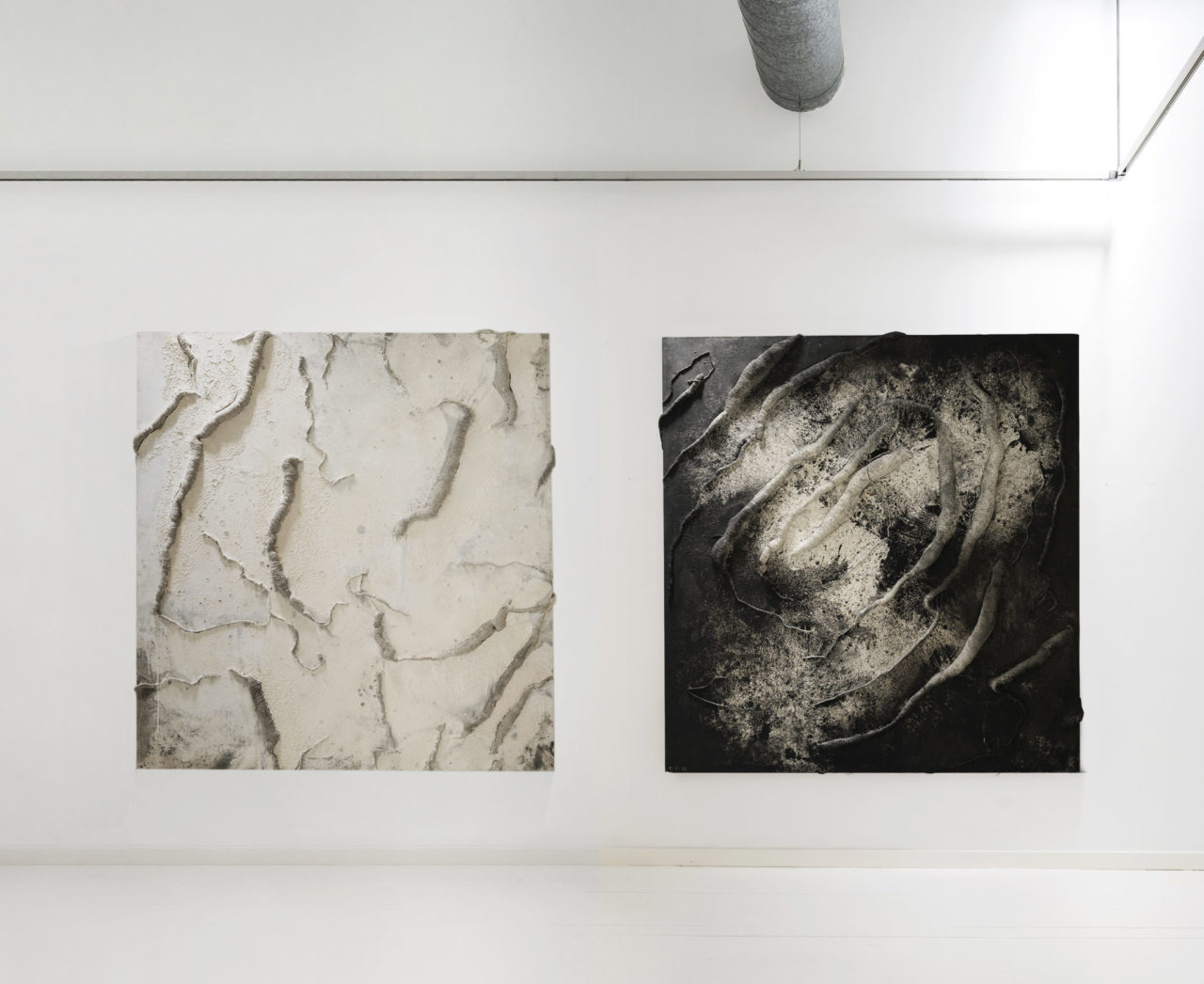 New Works by Guillem Nadal from his new “Sediments” Series.

This original duality of sculpture and painting in Nadal’s work is achieved by the use of linen flares that draw over the surface of the canvas sinuous shapes in bauf-relief. Hand placed one after the other, the flares depict a rounded silhouette that can remind the viewer of a wave, of a border.
This series of work, in which the artist has been working for years and that helped him to develop a whole concept that supports his oeuvre, is called “Proyecto para una isla” (Project for an island). No wonder the works by the artist remind us of waves, of rich textures that with their soft lines create the figure of an island.
His works are a sort of cartography, an imaginary island looked from above. Portrayed from a surrealist point of view, from what the island could be and what it means to be isolated.

Spanish writer Carlos Jover compares the work by Nadal with the one by writer Michel Houellebecq in “The Possibility of an Island”, which tells the tale of an impossible voyage to a new species beyond human beings.

“An island organised like a mille-feuille, materialised by layer upon layer of sediment deposited according to a hidden gravitation that can even be produced through a horizontal process at times, against all fallacious presumptions. Like the teeth of a plough that can feel what it penetrates, Guillem Nadal tears the Earth’s substance apart with his hands and the landscape that remains after this act, which is more like an encounter than like creation, brings us face to face with the substance of the material, free form all distorting anthropological interpretation.” 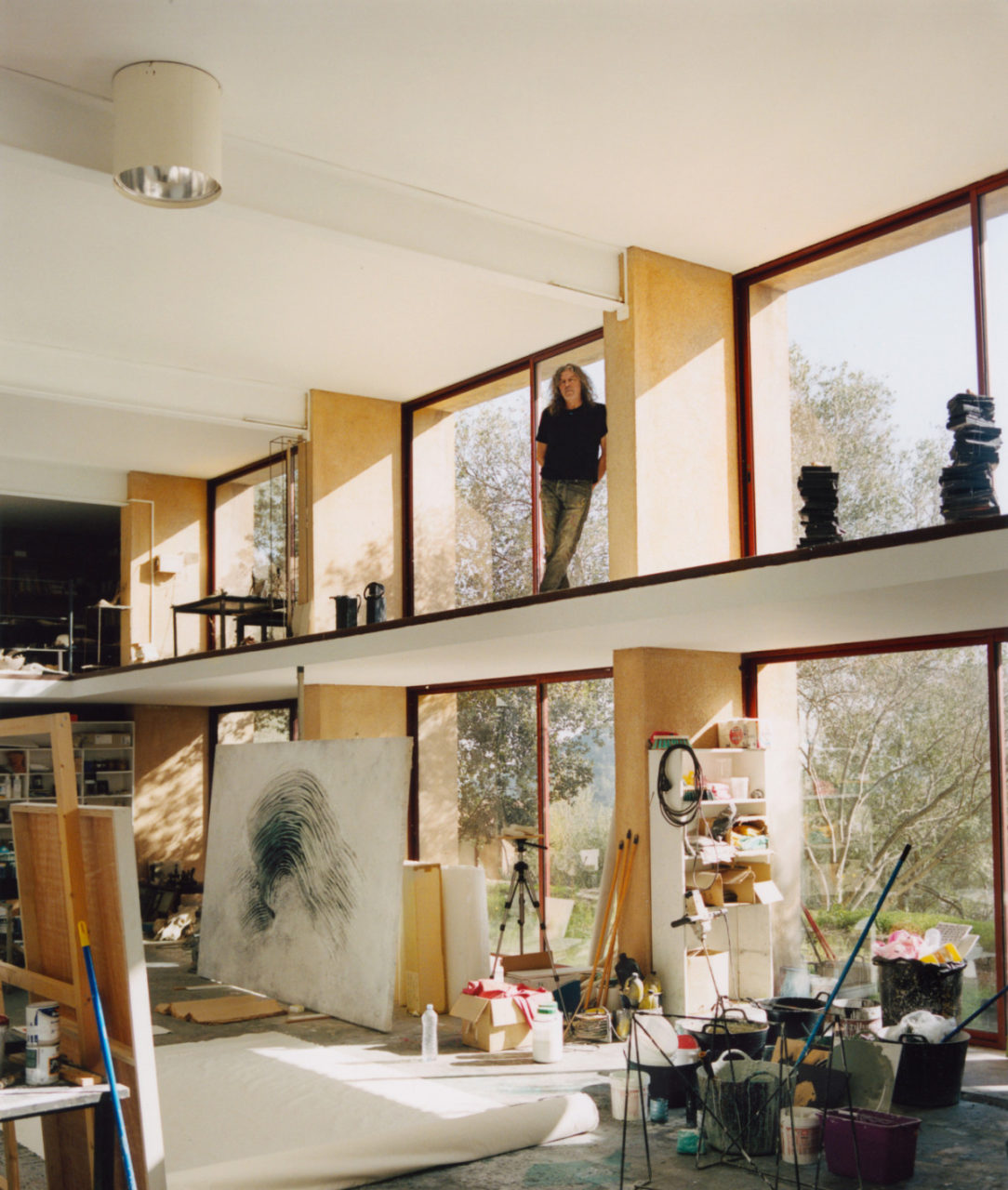 Guillem Nadal at his studio in Mallorca, photograph by STAFFAN SUNDSTRÖM.

Mostly working on big format canvases, the artist’s work goes from white to black and its respective shades of gray. Sometimes using dark green, or dark blue, his color palette is very subtle and minimal, only inspired by nature, where he gets all of his inspiration from.
The works by Nadal are so connected with nature, that depending on the viewer’s point of view, they can be perceived as nature persé, as a crater, as a deserted island, or even waves touching the sand of a beach.

In his new body of work “Sediments” presented for the first time in our gallery, the artist goes deeper into the representation of nature. He has reached artistic maturity, and even if he continues to develop his “Project for an Island” series, he is now working in this new body of work that reminds us of a pond, filled with live, but captured exactly in the moment of dryness, showing how fluctuating nature is and how it is constantly changing, going through difficult times to in the future, eventually hold live again. 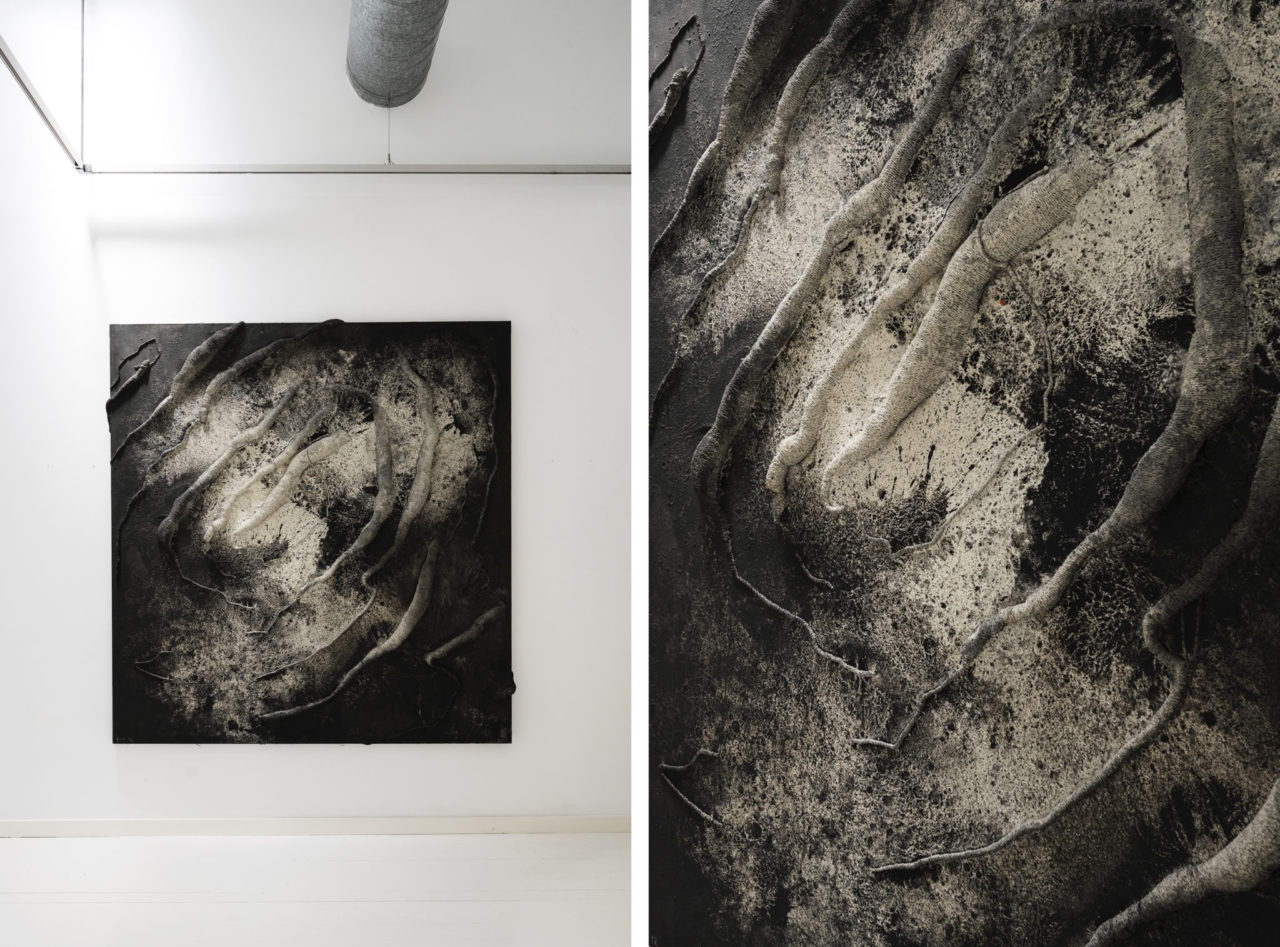 Guillem Nadal’s works are muted, deserted, they represent solitude, but not from a sad and naïve perspective, but from the happiness in the clarity of the mind and the absence of confusing ideas and noise. His works are made using a beautiful technique, that even showing the hand of the artisan in their pleats and stitches, depict a sublime reality, pure, almost untouched by the human, virgin.