Aythamy Arma’s oeuvre is so personal and intriguing, that when contemplating the paintings the viewer is confronted not with the ideas of an artist, or a story, but with himself. What are those intricate flowy black lines meaning to him? What do they convey?
Positivity, movement, despair.

That question is only for the viewer to answer, and for the artist to trigger.

At the end that is exactly what art should do, it should confront us with our reality, with our deepest feelings and emotions. 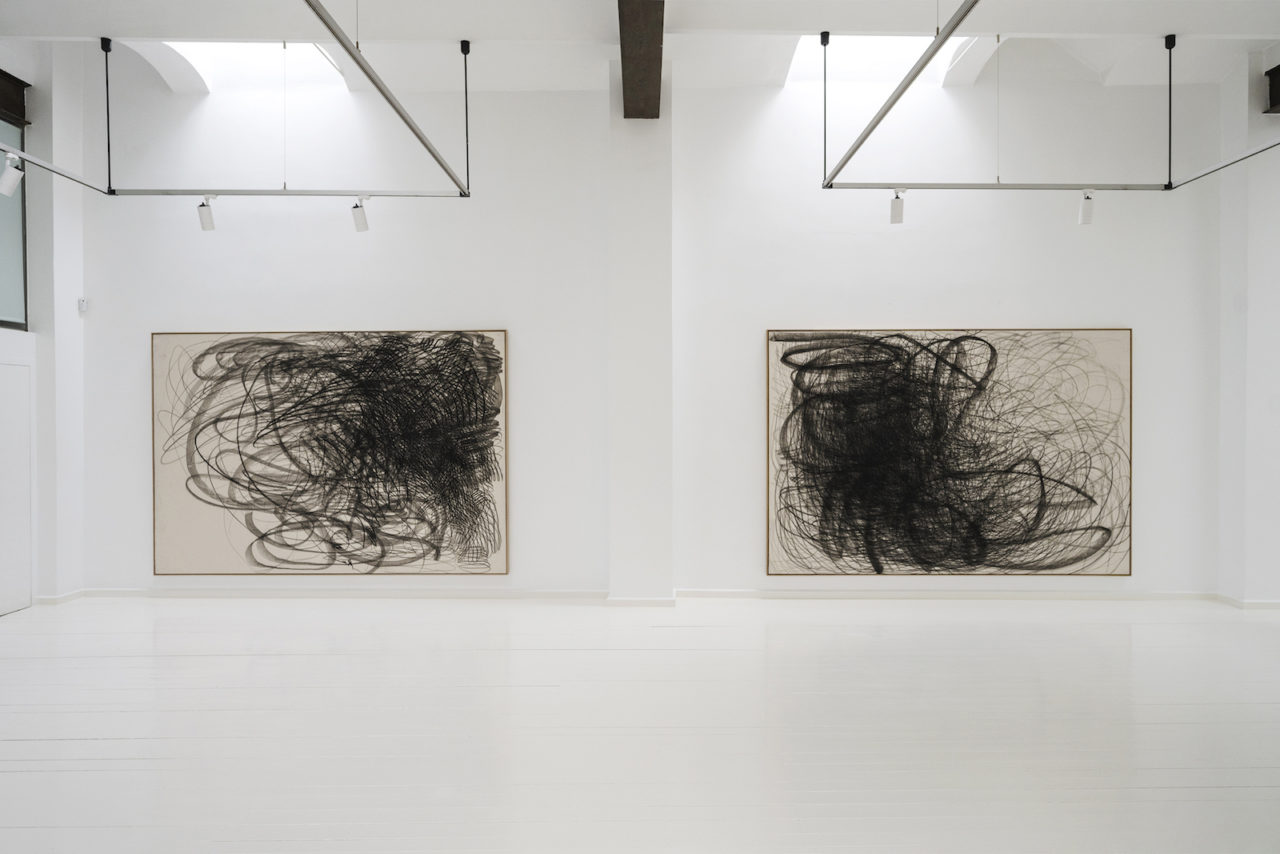 Born in the Canary Islands, and with a passion and sensitivity for Art since a very early age, Armas took time and dedication into creating a pictorial persona that makes his production very unique and recognizable. His work, dark masses of powerful lines made with Conté Pencil or Mixed Media on Canvas, is now part of recognized international collections and institutions.

With a short yet productive career that has impacted meaningfully the global art scene, the paintings by the artist have been exhibited in recognized galleries and Art foundations. At Alzueta Gallery we are proud to be representing his oeuvre and to introduce you to his never before seen bigger format paintings, where the artist works in his signature style in a 300 x 200 centimeters size canvas.

The physical and intellectual implications of producing his work in such a big scale format are yet to be studied by the artist, so far we are left with two beautiful and powerful artworks to enjoy and that will enrich the artist’s career in an exclusive and intimate solo presentation of the paintings at our gallery. 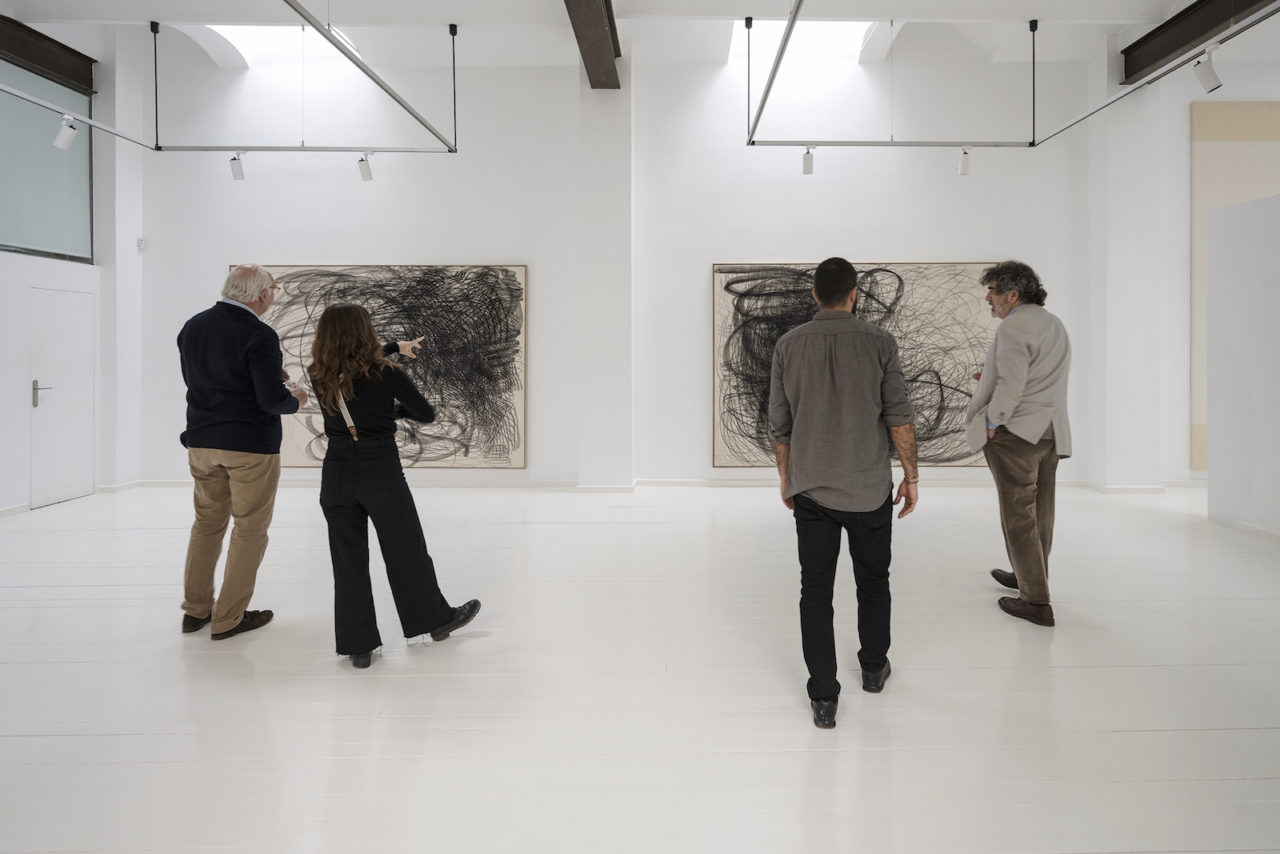 In this sense, the large format paintings allow me to make the gesture of the stroke as a movement where not only the hand and the arm, but the whole body, are involved in the creative process, turning drawing into a corporal act that brings it closer to dance and therefore includes dance elements such as rhythm, speed, pause and a new spatial awareness.

Movement, fluid energy, that moves from the hand to the shoulder, the waist and ends in the legs to start again.
The limit is not now in the frame, but how far I reach, how far I turn, how far I bend, how far I move and how I move.
New movements, other rhythms, different compositions.”
Aythamy Armas 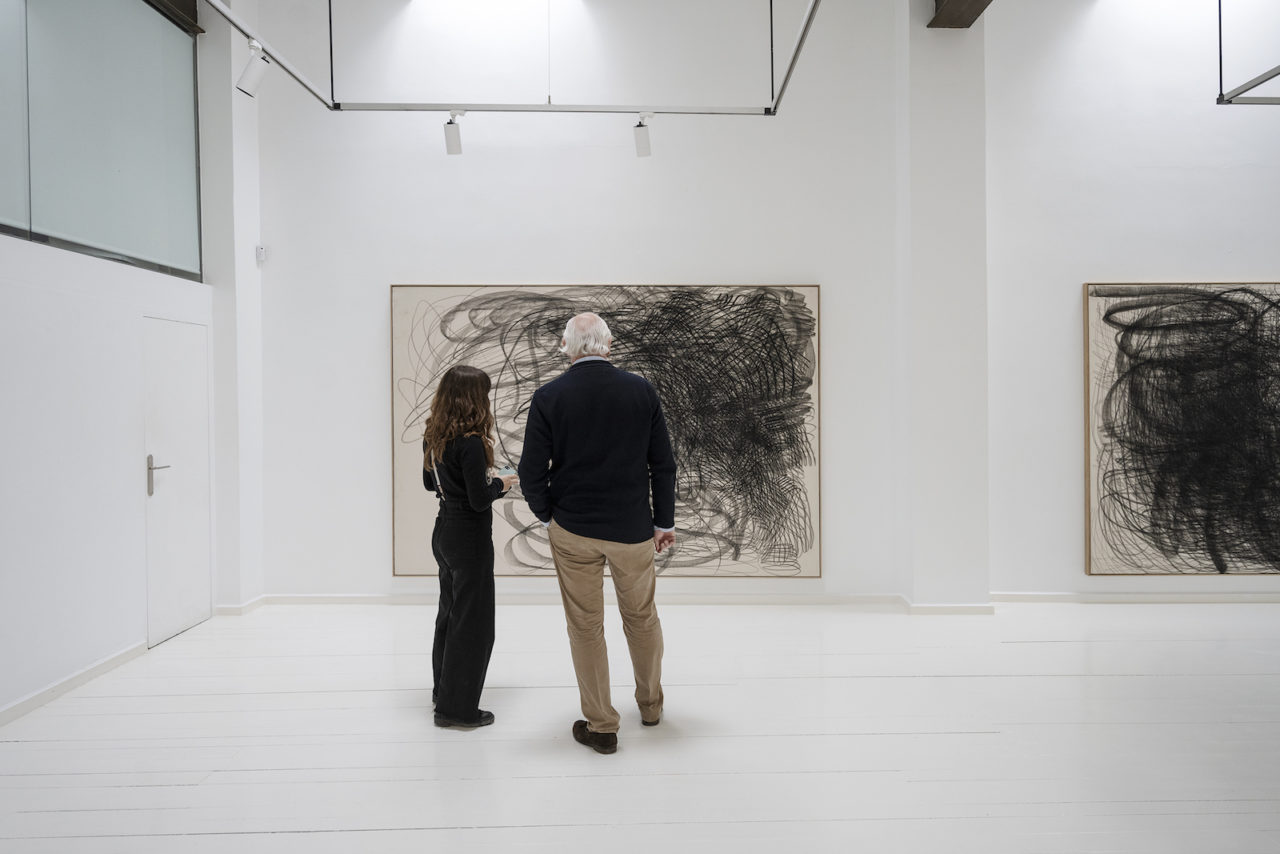 Aythamy Armas: specters of infinity.
By Jaime López Pestaña (July 2020)
The work of Aythamy Armas (Las Palmas de Gran Canaria 1977)
emanates force, vigor, impetus; like volcanic lava itself, sometimes as an explosion that emanates liquid from an erupting crater, other times already solidified, in black rock, serene and immovable, but leaving a mark, a footprint, marking the terrain.
Canary roots?
If we analyze Aythamy’s trajectory throughout his already long career, there is no doubt that he has an excellent artistic aptitude, with a refined pictorial technique and an effective mastery of drawing.

This is already corroborated by his initial figurative works prior to 2013, in which his project “yo mime conmigo” is conceptualized, a true organic x-ray around his body, which reflects on the search for the  self as a form of self-representation.

It is precisely these initial years that forge the artist, and intuitively lead him to take a step towards abstraction, through the project which we could call transition, entitled “Atmospheres”. This cumulus of clouds, end up clouding the horizon of his work and transform its pulse, until now contained, in a swaying of impulsive strokes and spots of color, as we can see in his later projects “White almost dark” and “Landscape”.

It is inevitable to find in this new stage formal references, not conceptual, to expressionism to North American abstract expressionism, and more specifically to Cy Twombly or even in Marc Rothko. 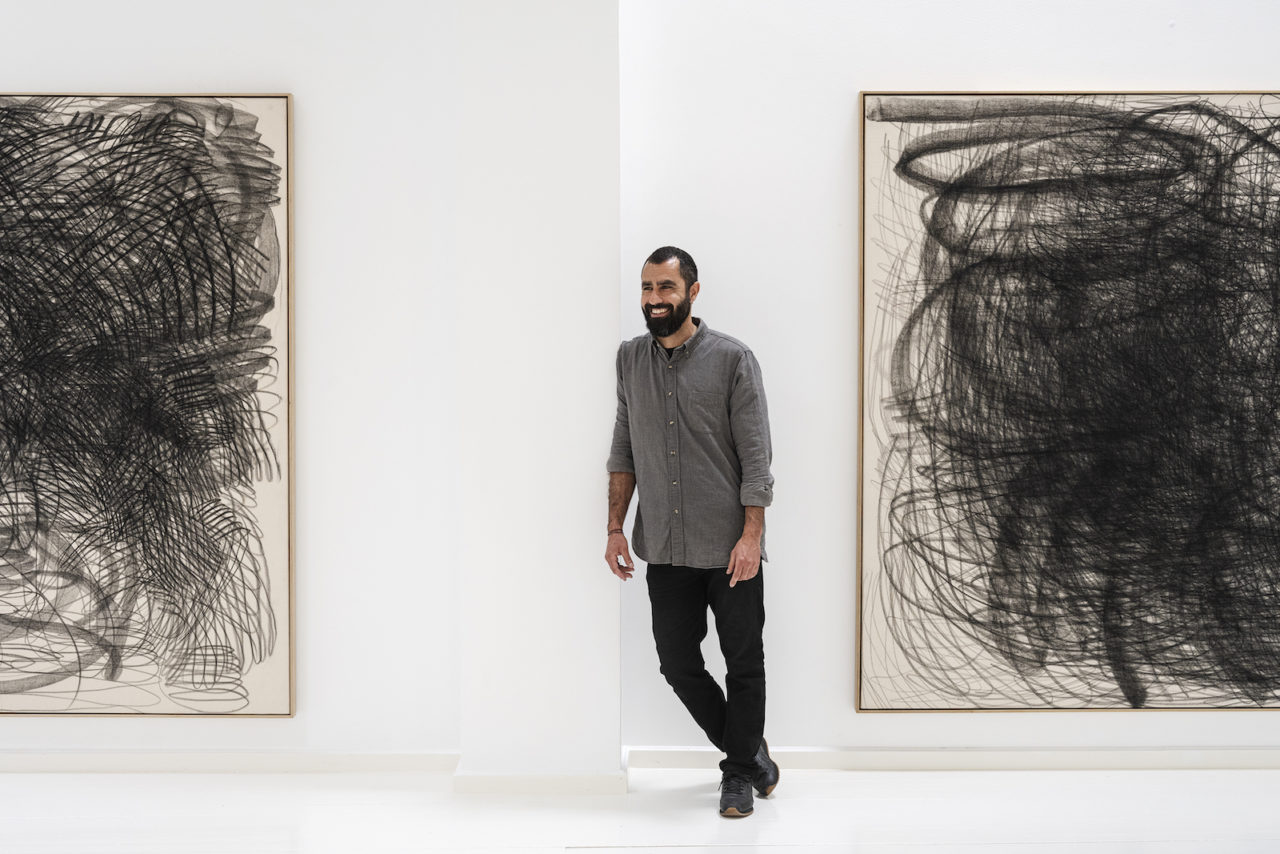 Aythamy works in a gestural and impulsive manner, “attacking” the canvas and the and paper with free strokes, and sometimes stains, as if it were calligraphy, with a sustained and premeditated rhythm to create sinuous forms, squiggly lines and stains, sometimes with a degradedor gradient effect that brings us closer to kinetic optical art, and that transport us to another dimension.

Using a Mixed Media technique based on conté pencil, aerosol paint or ink, his palette (paint or ink) monochromatic, is limited to brown, black and gray, although in some occasions he uses green, red or even going so far as to harmoniously combine two colors, as in some series of his “Landscapes” project.

However, Aythtamy’s work does not try to imitate or reinterpret the canons of this 20th century movement, but rather updates it, if possible, within the new abstraction of the 21st century, where he can be framed.
The work of every visual artist is a vivid reflection of his soul, of his past and present, of his concerns and desires, and of course, as Vasili Kandinsky said, of the historical context that surrounds his creation.. This conglomerate of ideas and sensations that emanates from the artistic creation can give rise to diverse and subjective interpretations in the work by Aythamy.
In this sense, and here lies the genius of this artist, his latest works remain true to his roots by expressing a deeper meaning and emotion through abstract rather than figurative forms.

Aythamy manages to contrast chaos and darkness, with a path that leads us to light and harmony. Sometimes even combining them in diptychs, as in his work “May”. As Carl Gustav Jung said: “darkness and chaos precede an expansion of consciousness”.

On the one hand, we find works with tangled strokes, where the gestural takes precedence over any other aesthetic and content consideration, in contrast to other works of meditative character that hypnotize the viewer, as if it were a specter, inviting him to evade, guiding him to another dimension, to a reality beyond the material world, towards the infinite. 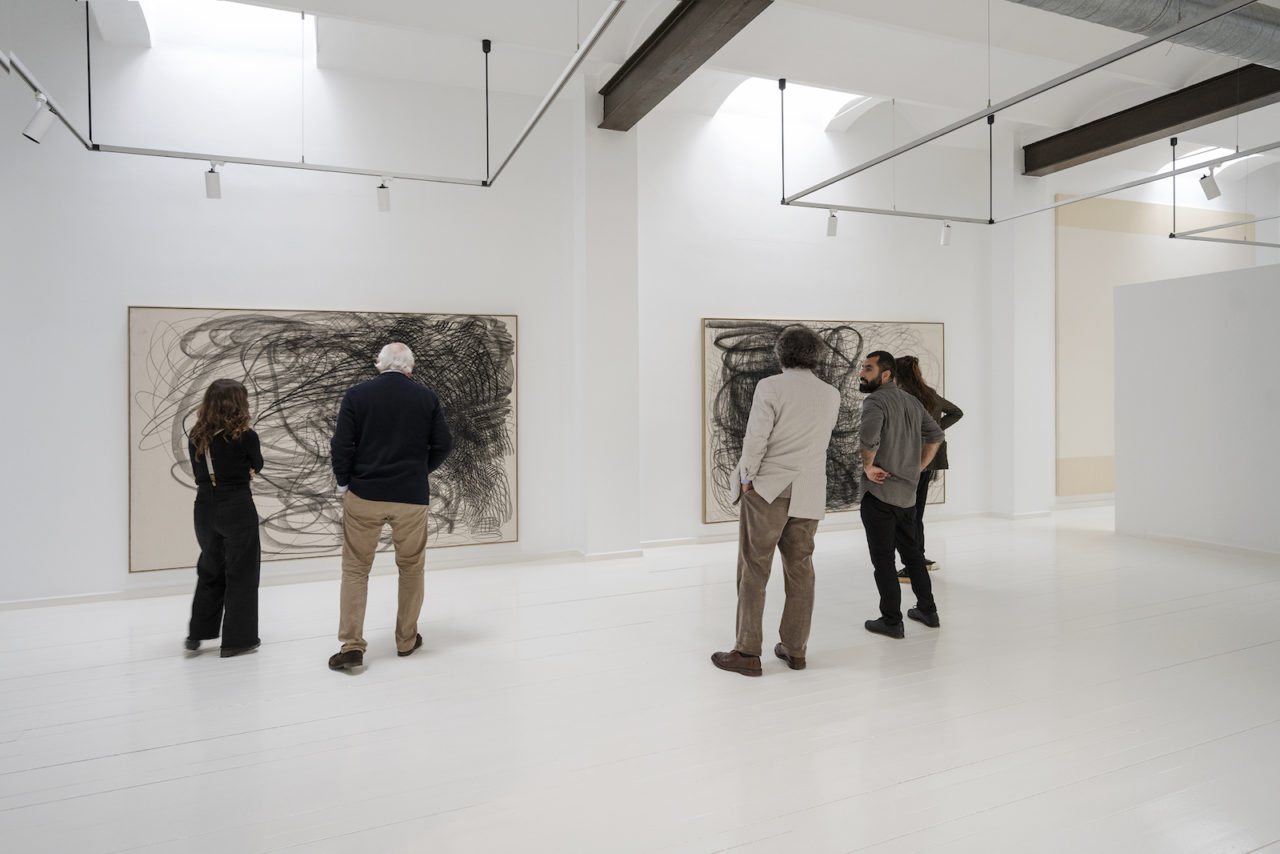